The second single from Nat Jay's upcoming album is here! "Bullseye" is available today on all digital platforms. Read on for the story behind the song. 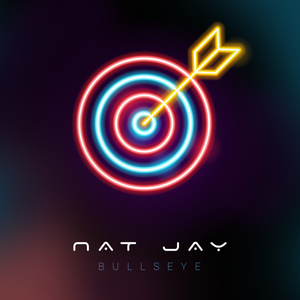 ‘Bullseye’ was the audition song for my producer Ovi and me. I wanted to take a more collaborative approach on this album, but I hadn’t decided who I was working with yet, so I had been writing with a lot of different artists and producers to see what would work best. Ovi and I had done a distance write a couple of years before, and it had gone well, so I asked him if he wanted to try doing a writing session. I went into his studio and after we talked for a while he started working on a track. We basically sat in silence for about two hours while he built the track and I wasn’t sure what I was supposed to do, so I just started writing something random to go with the track. After those two hours, Ovi turned to me and asked me if I had anything, and I meekly said, “Maybe, but I’m not sure, but maybe.” I sang it to him in the most pathetic, unconfident way, and he said, “I love it. Let’s record it.” And that was the first verse of ‘Bullseye.’ We even kept those vocals.

That day Ovi and I had been talking a lot about our health (since we both suffer from different illnesses) and about trying a whole bunch of things to help. We were saying how good it would feel to find that one thing that makes all the difference. I think that’s what infiltrated into the lyrics as I started to write. The strange thing was, that’s also what was happening for us as collaborators. After searching for the right sound and the right producer for this project, everything about this collaboration suddenly felt right. Thinking he would totally turn me down, I sent Ovi an email asking if he wanted to produce the rest of the album, and within half an hour, he sent back an unequivocal “Yes!!” Traditionally, Ovi works on his own on a track, without an artist present, but he had been feeling the same way about the ‘Bullseye’ demo, and was surprised and excited about how comfortable he felt working with me there. We had serendipitously written the song about our collaboration while it was happening!

I hope people can relate to this feeling, whether it’s in a relationship, a job, a new home, etc. That instinctual feeling when our gut tells us, “This is the right thing.” I hope people find inspiration in ‘Bullseye’ to keep trying and believing that it’s out there waiting for them to find. I hope this song keeps reminding me of that too.